Riddle of the Day

Every letter represents a different number between 0 and 9. Every number occurs once. 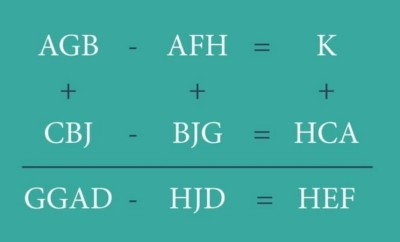 There is an extreme run on toilet paper and you decide to fill up your stocks. Tomorrow you will buy as much toilet paper as possible at 4 different stores. The stores will have in stock: A:25, B:30, C:20 and D:50 units of toilet paper. Each 5 minutes a unit of toiletpaper will be sold in each store independent of what you will buy. Furthermore there are certain travel times between the stores, which are shown below. 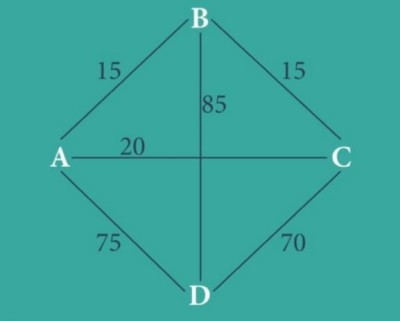 You may assume it costs no time in the store to buy the toilet paper. What is the most effective route to take such that you get the most toilet paper? How many units of toilet paper do you have?

The Winner of the Week is Kevin Schepers! He has won a Hertog Jan Beer Pack.

Five pirates discover a chest containing 100 gold coins. They decide to sit down and devise a distribution strategy. The pirates are ranked based on their experience (Pirate 1 to Pirate 5, where Pirate 5 is the most experienced). The most experienced pirate gets to propose a plan and then all the pirates vote on it. If at least half of the pirates agree on the plan, the gold is split according to the proposal. If not, the most experienced pirate is thrown off the ship and this process continues with the remaining pirates until a proposal is accepted. The first priority of the pirates is to stay alive and second to maximize the gold they get. Pirate 5 devises a plan which he knows will be accepted for sure and will maximize his gold. What is his plan?

To understand the answer, we need to reduce this problem to only 2 pirates. So what happens if there are only 2 pirates. Pirate 2 can easily propose that he gets all the 100 gold coins. Since he constitutes 50% of the pirates, the proposal has to be accepted leaving Pirate 1 with nothing.

Now let’s look at 3 pirates situation, Pirate 3 knows that if his proposal does not get accepted, then pirate 2 will get all the gold and pirate 1 will get nothing. So he decides to bribe pirate 1 with one gold coin. Pirate 1 knows that one gold coin is better than nothing so he has to back pirate 3. Pirate 3 proposes {pirate 1, pirate 2, pirate 3} {1, 0, 99}. Since pirate 1 and 3 will vote for it, it will be accepted.

If there are 4 pirates, pirate 4 needs to get one more pirate to vote for his proposal. Pirate 4 realizes that if he dies, pirate 2 will get nothing (according to the proposal with 3 pirates) so he can easily bribe pirate 2 with one gold coin to get his vote. So the distribution will be {0, 1, 0, 99}.

Smart right? Now can you figure out the distribution with 5 pirates? Let’s see. Pirate 5 needs 2 votes and he knows that if he dies, pirate 1 and 3 will get nothing. He can easily bribe pirates 1 and 3 with one gold coin each to get their vote. In the end, he proposes {1, 0, 1, 0, 98}. This proposal will get accepted and provide the maximum amount of gold to pirate 5.

You have a 100-story building and two eggs. When you drop an egg from any floor of the building, the egg will either break or survive the fall. If the egg survives, then it would have survived any lesser fall. If the egg breaks, then any greater fall would have broken it as well. The eggs are all identical and interchangeable. You’d like to find the minimum height that will break an egg. What is the fewest number of drops in which you are guaranteed to find the right floor?

Since we can’t afford to lose our only egg, we’re forced to start at the ground floor. If the egg breaks, then we’ve found the right floor. Otherwise, we get to keep our egg, and we can try again with the next floor. Continuing on like this, the distance we can explore with 1 egg and t tries is:
d_1(t) = t.

So, given two eggs, we’re guaranteed to find the right floor within fourteen tries.